This tutorial explains basic concepts of Cisco Access Control List (ACL), types of ACL (Standard, Extended and named), direction of ACL (inbound and outbound) and location of ACL (entrance and exit). Learn what access control list is and how it filters the data packet in Cisco router step by step with examples.

Basically ACL is the integrated feature of IOS software that is used to filter the network traffic passing through the IOS devices. Network traffic flows in the form of packets. A packet contains small piece of data and all necessary information which are required to deliver it. By default when a router receives a packet in interface, it takes following actions:-

This default behavior does not provide any security. Anyone who know the correct destination address can send his packet through the router. For example following figure illustrates a simple network. 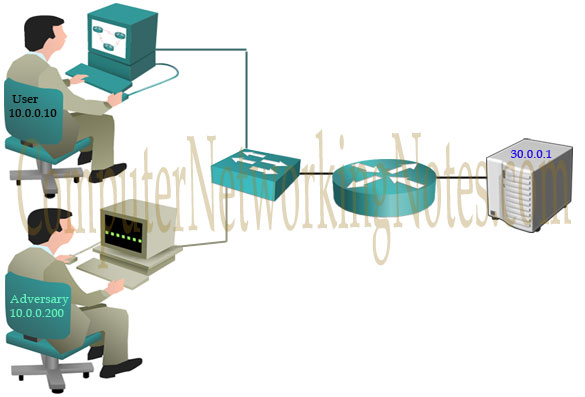 In this network, no security policy is applied on router. So router will not be able to distinguish between user’s packet and adversary’s packet. From router’s point of view, both packets have correct destination address so they should be forwarded from exit interface.

This tutorial is the first part of our article \”Cisco IP ACL Configuration Guide\”. You can read other parts of this article here:-

This tutorial is the second part of this article. In this part I will explain Standard Access Control List configuration commands and its parameters in detail with examples.

This tutorial is the third part of this article. In this part I will provide a step by step configuration guide for Standard Access Control List.

This tutorial is the fourth part of this article. In this part I will explain Extended Access Control List configuration commands and its parameters in detail with examples.

This tutorial is the last part of this article. In this part I will provide a step by step configuration guide for Extended Access Control List.

Suppose we tell the router that only 10.0.0.10 has the right to access the 30.0.0.1. To match with this condition router will take following actions:- 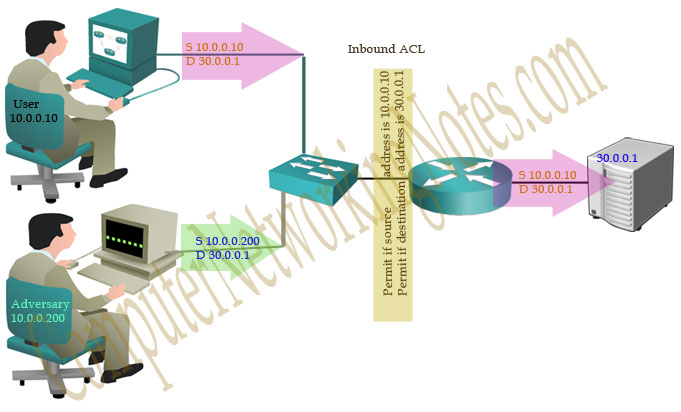 Now only the packets from 10.0.0.10 are allowed to pass from router. With this condition adversary will not be able to access the server. We can create as much conditions as we want. Technically these conditions are known as ACLs. Besides filtering unwanted traffic, ACLs are used for several other purposes such as prioritizing traffic for QoS (Quality of Services), triggering alert, restricting remote access, debugging, VPN and much more. Due to complexity, these uses of ACLs are not tested in CCNA level exams. CCNA level exams test only basic uses of ACLs such as filtering the traffic and blocking specific hosts.

Okay now we have basic understating of what ACLs are and what they do. In next section we will understand technical concept of ACLs.

Direction and location of ACLs

A packet interacts with three locations during its journey from router:-

We cannot filter the packet in the middle of router where it makes forward decision.
Decision making process has its own logic and should not be interfered for filtering purpose. After excluding this location,
we have two locations; entrance and exit. We can apply our ACLs conditions on these locations.

There are two types of ACLs:

ACLs are the part of Cisco IOS from its beginning. In earlier days simple filtering was sufficient. Standard ACLs are used for normal filtering. Standard ACLs filter the packet based on its source IP address.

Over the time security becomes more challenging. To mitigate current security threats, advance filtering is required. Extended ACLs takes this responsibility. Extended ACLs can filter a packet based on its sources address, destination address, port number, protocol and much more.

I will explain above ACLs in detail with examples in next parts of this article.

That’s all for this part. In next part of this article I will explain Standard Access Control List configuration commands in detail with examples.