This tutorial explains the basic functions, operations, and characteristics of a computer. Learn the four major functions of a computer through diagrams and examples.

Taking data and instructions from a user, processing the data as per instructions, and displaying or storing the processed data, are the four major functions of a computer. These functions are also known as the input function, process function, output function, and storage function, respectively.

The following diagram shows an example of these functions.

Components or devices of a computer, based on the function in which they are used, can be classified into four major types: the input devices, output devices, storage devices, and processing devices. For example, if a component processes the given instructions, the component is known as the processing device. Or if a device displays the processed data, the device is known as the output device.

A computer is a data processing machine. It does nothing until a user (or a script or a program) provides the data that needs to be processed and the instructions that tell it how to process the data.

Input data and instruction can also be generated from a non-standard input device such as the hard disk and CD/DVD. For example, a batch file in the Windows system may instruct the CPU to execute a program or a script at a particular time.

Installation disks are another good example of non-standard input devices. Usually, they contain a script or an executable program that automatically starts the installation process as soon as the disk is read.

Once the data and instructions are received by the input function, the computer starts the processing function. In this function, a computer processes the received data according to the instructions.

To process the input data according to the instructions, the computer uses the CPU. A CPU is the main processing component of a computer. It processes user instructions, executes scripts and programs, and runs commands of the OS that provide a platform for installing and using application software.

Only components or devices that provide the complex functionality such as Graphics cards, I/O devices, and network interface cards use auxiliary processors. For example, if a user draws an image, the auxiliary processor on the graphics card performs all calculations that require in drawing the image on the display device.

The following image shows a sample of both a CPU and an auxiliary processor.

The following table lists the main differences between a CPU and an auxiliary processor.

A user, based on his requirement, can connect and use two, three or more output devices to the computer. For example, after viewing the processed data, a user can send it to the printer for printing.

The following image shows an example of both types of storage components. 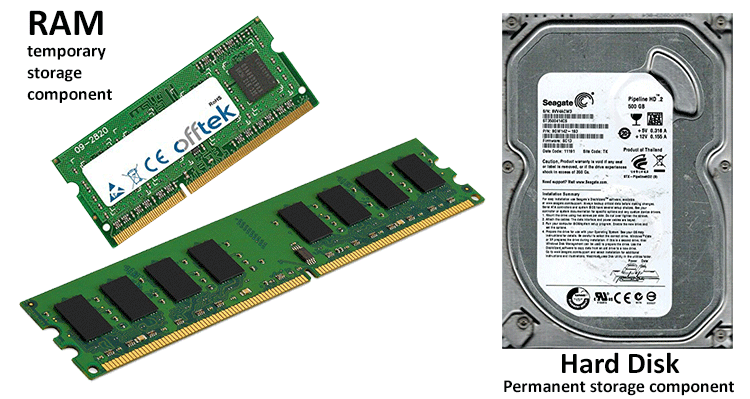 The following table lists a few sample actions along with the name of devices and functions that are used when they are performed.