This tutorial explains what the Cisco IOS modes are and how they work in detail. Learn the Cisco modes and the commands that are used to navigate and access them.

The first three modes are used to view current settings and configure new settings or modify existing settings. The next two modes are used to set up the initial device configuration and troubleshoot the device in an emergency, respectively.

Let\’s understand each mode in detail.

This is the first mode of the IOS. No matter how a user accesses the IOS, the IOS always places the user in this mode. If configured, the IOS prompts the user to enter the password to access this mode.

To close this mode or to return into the user exec mode, use the exit command or the end command.

As the name suggests, this mode includes privileged or powerful commands. This mode is usually used for the following purposes: –

As the name suggests, this mode includes the commands that are used to configure the device. From this mode, a user can not only configure new settings but can also change, update or delete existing settings.

To enter this mode, use the \’configure terminal\’ command from the privileged-exec mode. To exit from this mode, you can use the \’end\’ or the \’exit\’ commands. You can also press the CTRL + Z key combinations.

The following image shows how to navigate between the user exec mode, privileged exec mode and the global configuration mode. 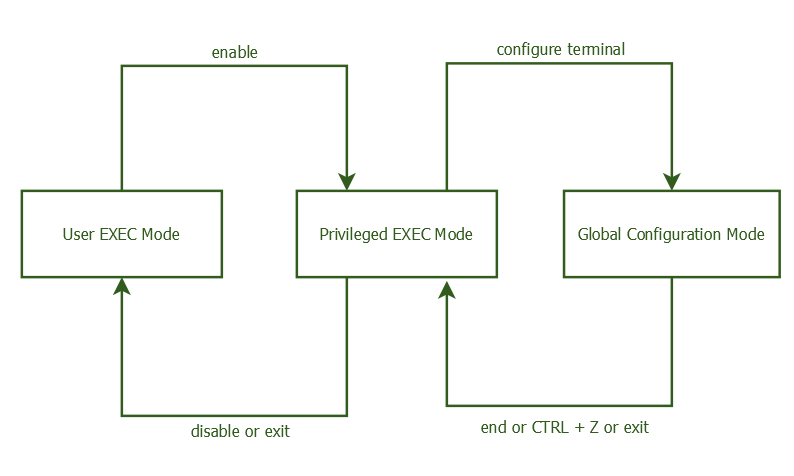 Of all available modes, this mode has the largest number of commands. To organize these commands more effectively, this mode groups similar commands into sub-configuration modes.

The following table lists some of the most common sub-configuration modes that are commonly available across all flavors of the IOS.

This mode presents a text-based wizard that asks questions about initial settings in the sequence. Based on the answers provided by the user, the IOS automatically builds the initial configuration.

The following image shows how all IOS modes work together. 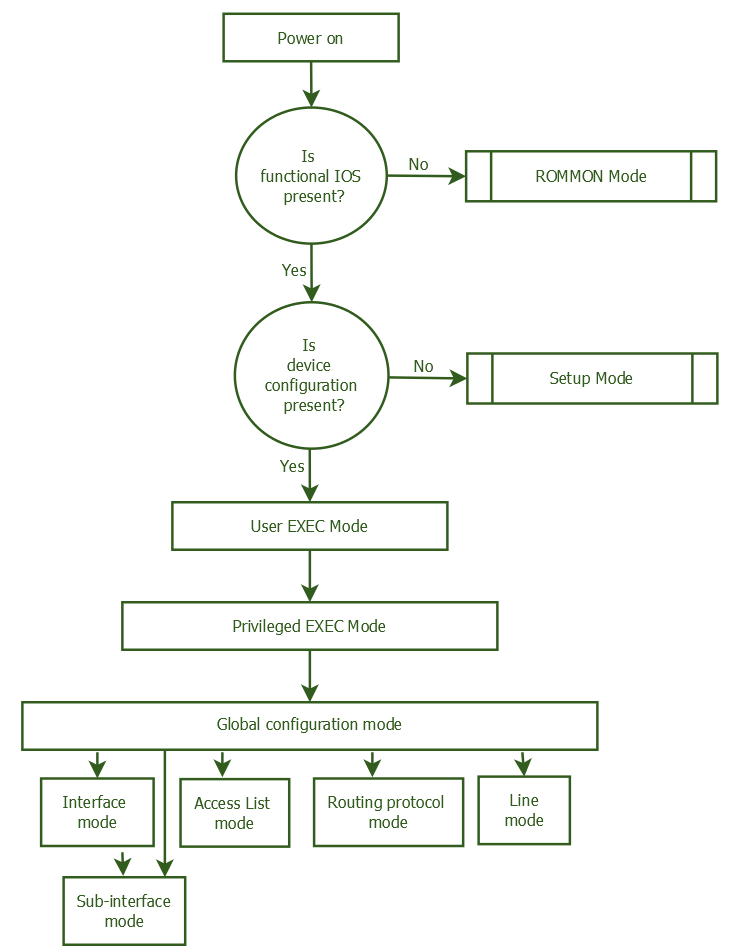 The following table lists commands that are used to navigate the different modes of the IOS.

That\’s all from this part. In the next part of this tutorial, we will learn how to take the backup of the IOS and restore it from the backup when it is required. If you like this tutorial, please don\’t forget to share it with friends through your favorite social network.