In networking model, the terms encapsulation and de-encapsulation refer to a process in which protocol information is added to the data and removed from the data when it passes through the layers. 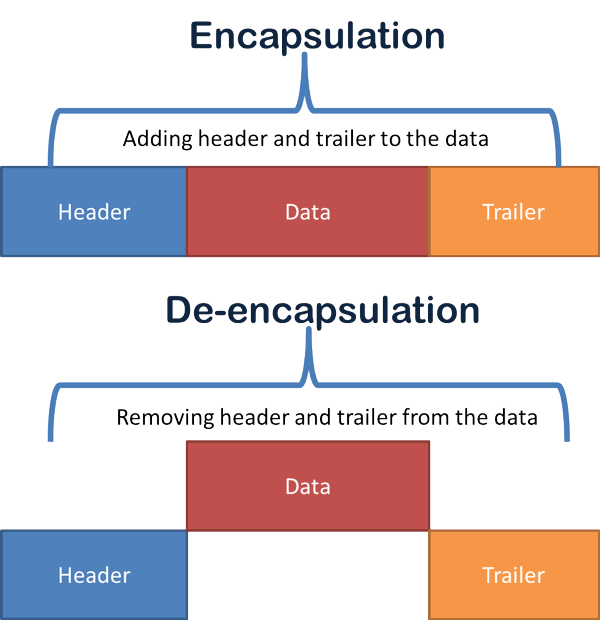 This tutorial is the last part of the article \”Networking reference models explained in detail with examples\”. This article explains following CCNA topic.

Similarities and Differences between OSI and TCP/IP Model

This tutorial is the third part of the article. It compares OSI reference model with TCP/IP model and lists the similarities and differences between both models.

This tutorial is the fourth part of the article. It explains the five layers of TCP/IP model in detail.

Following table lists the terms used by layers in both models to represent the encapsulated data.

Let’s understand each term in detail with step by step data encapsulation process.

Upper layer (application layer in TCP/IP) or layers (application, presentation and session layers in OSI) create data stream and handed it down to the transport layer.

Transport layer breaks the received data stream from upper layers into smaller pieces. Next, it creates a header for each data piece. This header contains all necessary information about the piece that the transport layer in remote host needs to reassemble the data stream back from the pieces. Once header is attached, data piece is referred as segment. Once segments are created, they are handed down to the network layer for further processing.

Network layer creates a header for each received segment from transport layer. This header contains information that is required for addressing and routing such as source software address and destination software address. Once this header is attached, segment is referred as packet. Packets are handed down to the data link layer.

In original TCP/IP model the term packet is mentioned as the term datagram. Both terms packet and datagram refer to the same data package. This data package contains a network layer header and an encapsulated segment.

Data link layer receives packets from network layer. Unlike transport layer and network layer which only create header, it also creates a trailer with header for each received packet. The header contains information that is required for switching such as source hardware address and destination hardware address. The trailer contains information that is required to detect and drop corrupt data packages in the earliest stage of de-encapsulation. Once header and trailer are attached with packet, it is referred as frame. Frames are passed down to the physical layer.

Physical layer picks encoded signals from media and converts them in frames and hands them over to the data link layer.

If frame is fine, it reads the destination hardware address of the frame to determine the fame is intended for it or not.

Upper layers format data stream in such format that the target application can understand. 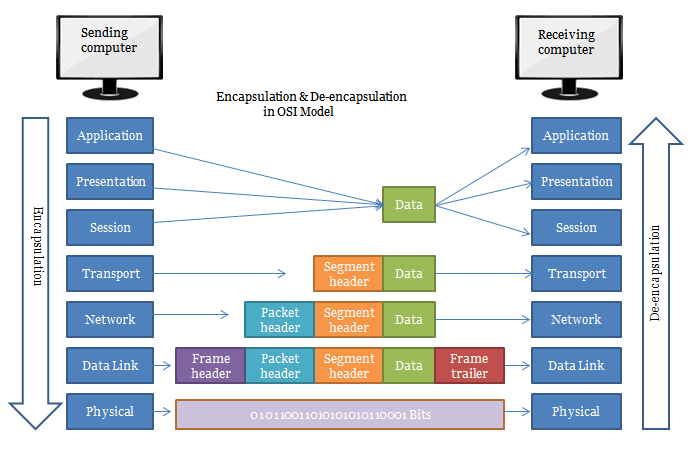 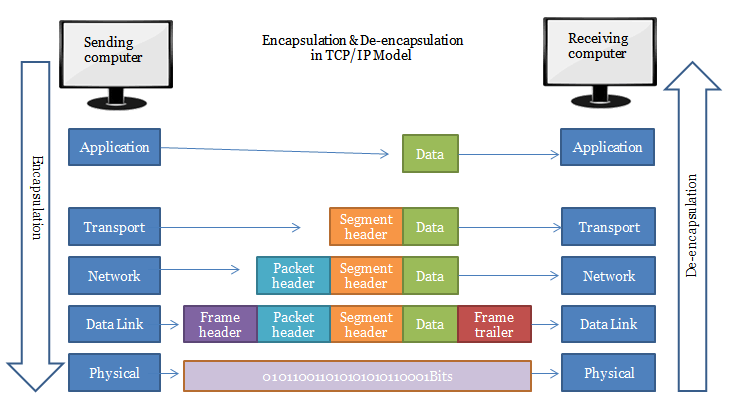