To understand the basic difference between throughput and bandwidth, think about a highway. If 24 cars can go through on a highway in a second, then the bandwidth of that highway is 24 cars per second.

But, in practice, this never happens. Cars can’t be driven in bumper-to-bumper mode. The actual number of cars that can go through depends on several conditions such as weather, road condition, and lights. If under given conditions only 20 cars can go through in a second, then the throughput of that highway is 20 cars per second. 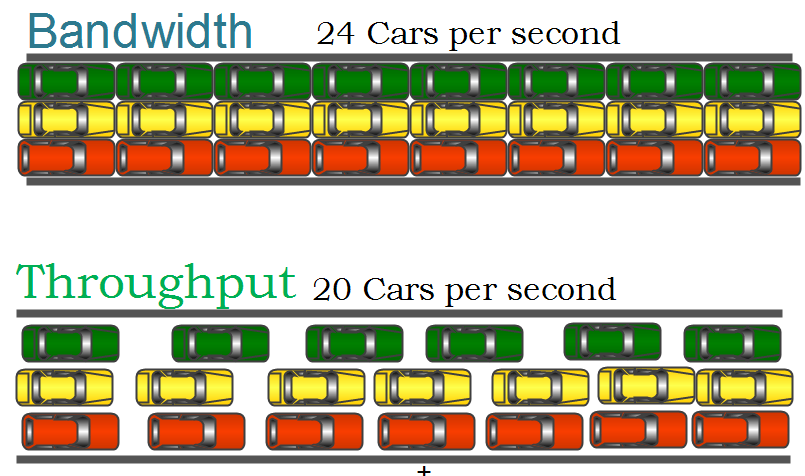 Ethernet overhead (the total of extra information which each data packet contains such as header and trailer): 10 megabits.

The total amount of data to be transferred: 56 megabits (46 megabits + 10 megabits)

Amount of data lost due to errors and acknowledgments: 28 Mbps

The time it takes to transfer the entire file: 56 megabits/28 Mbps = 2 seconds

Throughput always remains lower than the bandwidth. Because of this, provides usually advertises connection speed in up to form such as; up to 100 Mbps, up to 1 Gbps, etc.

Computer networks use two types of signals; analog and digital for data transmission. The throughput and bandwidth of digital signals are measured in the bit rate. A bit rate is the number of bits transmitted per second, such as 1000 bits per second or 1Kbps.

The throughput and bandwidth of analog signals are measured in the baud rate. A baud rate is the number of symbols transmitted per second. A symbol is a voltage, frequency, pulse, or phase change in the analog transmission.

The bandwidth of analog signals is computed by subtracting the lower frequency from the higher one. For example, if a cable can carry frequencies from 300 Hz to 3300 Hz, then the bandwidth of that cable is 3000 Hz (3300 – 300).

Distance
Signals lose strength as they travel on a medium. Because of this, the throughput of a medium decreases as the distance increases. Amplifiers (for analog signals) and repeaters (for digital signals) are used to increase signals’ strength.