This tutorial explains how to use grep command in Linux with practical examples such as performing case insensitive search, printing lines numbers and displaying number of lines before and after every match in grep output.

The grep command allows us to extract any information from any file. As Linux stores settings and configurations in text files, knowing how to use the grep command not only helps in exams but also boosts confidence on job.

This tutorial is the second part of the article \”grep command in Linux explained with options and regular expressions\”. Other parts of this article are following.

This tutorial is the first part of the article. It explains grep command options and regular expressions with the special meanings of Meta characters.

This tutorial is the third part of the article. It explains how to use regular expressions with grep command in detail with practical examples.

This tutorial is the fourth part of the article. It explains how to use extended regular expressions with grep command in detail with practical examples.

For demonstration purpose, I will use the practice lab which I created in the first part of this article.

To search a sentence or multiple words which contain white space, we have to enclose them with quotes.
If we do not enclose the white space then grep searches only the first word from the specified sentence.
Remaining words are treated as files where grep searches for the specified pattern.
To see it practically, let\’s search a user name Sanjay Gupta in file userdata without quote and with quote.

How to perform a case insensitive search with grep

As we can see in above output, without –i option, grep matched exact word but with this option it ignored the case.

How to print line numbers in grep command output

By default, grep does not print line numbers in output. But if require, you can ask it to print the line numbers along with lines.
To print number of lines, use -n option. For example, following command search a keyword Host in file /etc/ssh/ssh_config and print
the output with line numbers.

How to search all files and directories recursively with grep command

In our lab, we created a multilevel directory structure. We also created a file named custom_file in the last
directory of this structure. This file contains some dummy text string. Let\’s find that string from the root directory. 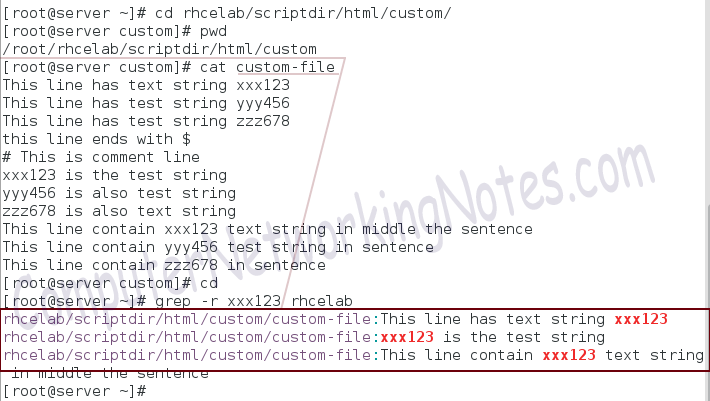 If you want to search only in few files, instead of searching in all file recursively you can search only in desired files. The grep allows us to specify multiple files name as arguments.
For example, to search the text string \”test\” in file1, file2, file3 and file4, you can use following command.

If you don\’t know which file contains the specified pattern, you can perform a file name search with grep command.
For example, suppose you don\’t know which files in /etc/ directory contain IP configuration or IP related settings.
In this case, you can ask grep to search all files in /etc/ directory for keyword \”IP address\” and print their names at command
prompt with following command.

How to show number of lines before every match

How to print next lines after every match

How to show line before and after every match

That\’s all for this part. In next part of this tutorial, I will explain how to use regular expressions with grep command in detail.
If you like this tutorial, please share it with friends through your favorite social platform.