This tutorial provides 10+ practical examples of regular expressions or regex such as search lines which start or end with a specific word or pattern, remove blank or empty lines, use multiple regex, search multiple words, etc.

This tutorial is the third part of the article \”grep command in Linux explained with options and regular expressions\”. It explains following RHCSA/RHCE exam objective.

Use grep and regular expressions to analyze text

Other parts of this article are available here.

This tutorial is the first part of the article. It explains grep command options and regular expressions with the special meanings of Meta characters.

This tutorial is the second part of the article. It explains how to use options with the grep command in detail with practical examples.

This tutorial is the fourth part of the article. It explains how to use extended regular expressions with grep command in detail with practical examples.

By default, grep searches the specified pattern or regular expression in entire line.
To instruct it to search the specified pattern only at the starting of the lines,
a Meta character ^ is used with the pattern. Let\’s take an example.
Search all lines which start with # sign from a file named user_profile.

This type of regular expression is commonly used when working with configuration files or shell scripts.
Let\’s take two more examples which use this regex.

In a well written configuration or script file, comments provide detailed information about that file.
A line which starts with # is treated as comment line in these types of files.
While processing a script or configuration file, Linux ignores all the lines which start with # sign.

Let\’s print the comment only from the configuration file /etc/yum.conf.

In above example, we printed all comment lines from the file /etc/yum.conf. Now let\’s print all lines except comment lines.

To instruct grep command to look the specified pattern only in the end of the line,
a Meta character $ is used with the regular expression. Let\’s take an example.
Search users who work in sales department from the file userdata.

You can also use this regex with –i option, to perform search in both cases; upper case and lower case.

Let\’s take one more example of this search pattern.

grep regex (print the list of users who use bash shell)

The /etc/passwd file stores users\’ information. Each line in this file represents an
individual user account and contains information only about that account in colon separated columns.
Shell information is stored in the last column of the line.

To print the list of users who use the bash shell, you can use the regular expression bash$ as following.

Left pane of the following figure shows a default script file.
Right pane shows how grep command searches the pattern ^$, with and without -v option. 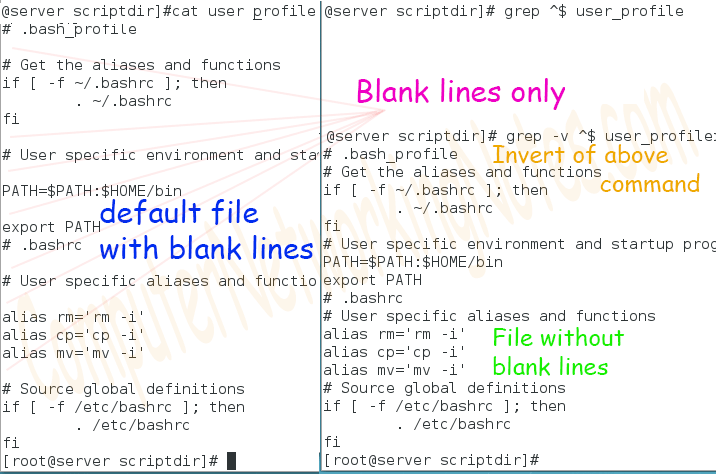 This command may not work if file is created on Windows system. To remove blank lines from a
file which is created on other systems except *nix, use \’^[[:space:]]*$\’ regular expression.

How to use multiple regular expressions with grep command

Let\’s take an example. Figure out whether a particular rpm package is installed in system or not.

The rpm –qa command lists all installed packages in system. We can redirect the output of this
command to the grep command. Later, we can instruct grep command to search the specified package in the output.

Let\’s check, whether the package vsftpd is installed or not by following this approach.

That\’s all for this part. In next part, I will explain how to use extended regular
expressions in detail with practical examples. If you like this tutorial, please don\’t forget to share it from your favorite social channel.