This is the classic method of signaling. In this method, signals move like waves. The sending device converts data into waves and loads those waves on the media. The receiving device picks up those waves from the media and converts them back into the data. 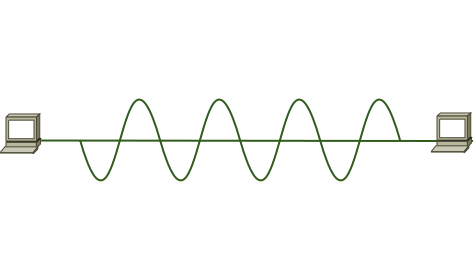 An analog signal has four essential properties; amplitude, frequency, wavelength, and phase. The following image shows an example of these properties. 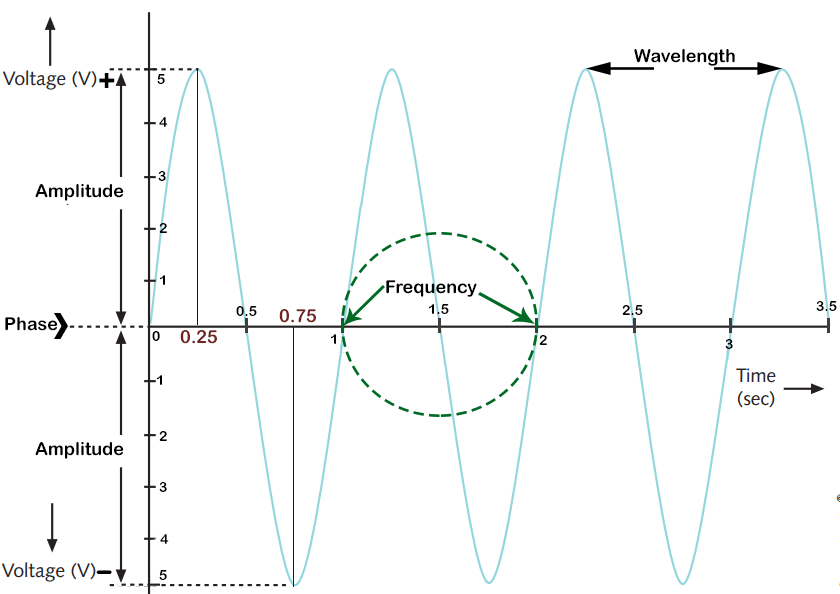 Amplitude measures the signals’ strength. At any point, in the given time, the amplitude is the height of the wave.

Wavelength is the distance between corresponding points of a wave’s cycles. It is expressed in meters or feet. It is inversely proportional to the frequency.

A phase is the progress of a wave in relationship to a fixed point and time. A phase is measured in degrees. By using different phases, multiple waves of identical amplitudes and frequencies can be transmitted on the same media.

This is the modern method of signaling. In this method, signals are transmitted in binary form as pulses. In binary form, information is stored by using two types of bit; on bit and off bit.

To transmit both types of bits, two types of pluses are used in digital signaling; a pulse of positive voltage and a pulse of zero voltage. Both pulses are represented as on bit (1) and off bit (0) respectively.

To transmit a binary bit, an individual pulse is used. In other words, every pulse in digital signals represents a signal binary bit.

The following image shows an example of digital signaling. 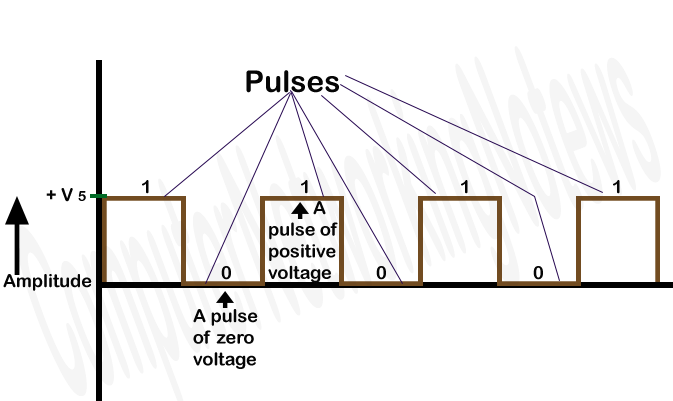 Analog signaling uses infinite and continuous waves to transmit the information. These waves are represented as sine waves. As sine waves have infinite variations, analog signals are more prone to distortion and noise. Human voices and natural sounds are examples of analog signals.

Digital signaling uses pluses to transmit information. These pluses are represented as square waves. A pulse either carries a positive voltage or no voltage at all. Since there are no infinite variations, digital signals are less prone to distortion and noise. Data storage devices such as hard disks and optical drives are examples of digital signaling.

That’s all for this tutorial. In the next part of this article, we will understand how analog signals and digital signals are converted into each other. If you like this tutorial, please don’t forget to share it with friends.