This tutorial explains how to configure NTP Server and NTP Client in Cisco Router step by step with practical example. Learn basic concepts of NTP such as what NTP is, how NTP works, NTP stratum levels, meaning of synchronized and un-synchronized NTP clock in detail.

Let’s understand it with a simple example.

Can you guess what went wrong in this example? 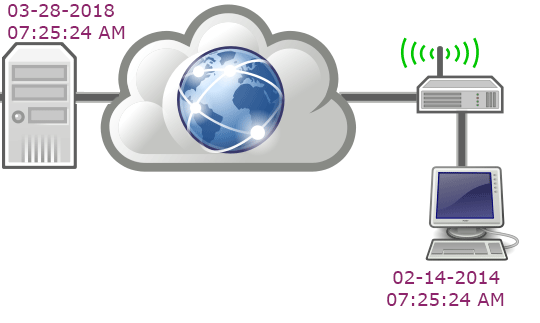 Well… In order to mitigate security risks (such as phishing attack), usually financial sites issue a digital certificate. Browsers use this certificate to the check the identity of the website. This certificate remains valid only for certain time period. Web browser uses local system’s time to authenticate the certificate. If browser finds any unusual difference between both times, it doesn’t validate the certificate and issues a warning message to user. This is what exactly happened in this example.

Let’s take another example. Sales section of a company opens at 7.00 AM and close at 7.00 PM. Company wants to allow users to access its server only in business hours. So it configured a time based firewall in router which connects users with server. In this router clock is running 12 hours ahead from the server’s clock.

Will this setup work? 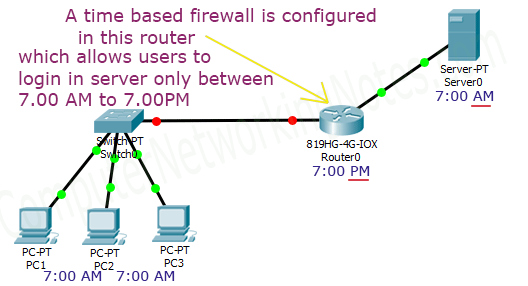 Nope, users will never be able to login in server in working hours. Router uses its own clock to authenticate the access. With this setup, router allows users to login between 7.00 PM to 7.00 AM instead of 7.00 AM to 7.00 PM.

A Cisco router can be configured in three modes: – 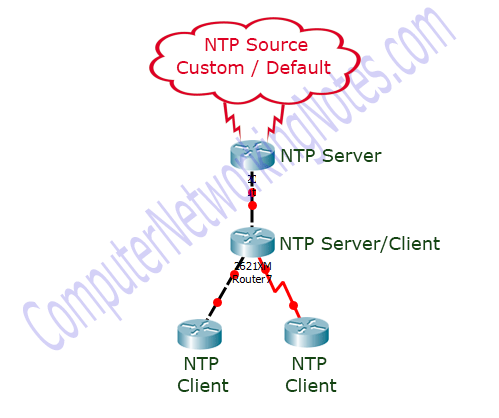 In this mode, Router reads time from NTP Source. Unless we manually define the NTP source, router uses its own clock as NTP source. As per requirement, we can configure router’s clock or can use an external clock as NTP source. Once NTP Source is configured, NTP Server router advertises this time in network. In this mode, router only advertises NTP updates. It doesn’t accept any NTP update for other NTP server.

In this mode, router receives updates from NTP server and advertises them from its own interfaces. This way router plays both roles. As NTP Client it receives NTP updates and as NTP Server it advertises NTP updates.

In this mode, as a NTP Server, instead of using its own NTP Source, router uses received NTP updates from other NTP server to advertise the NTP updates. This feature allows us to use a single centralized NTP source at NTP Server.

In this mode, router only receives NTP updates. It does not advertise received updates. It uses them to sync its own clock.

To understand NTP configuration in detail with practical example, let’s create a simple topology in GNS3 as illustrate in following figure

To learn how to install GNS3 step by step with examples, see this tutorial

Learn how to install and configure GNS3 for CCNA lab 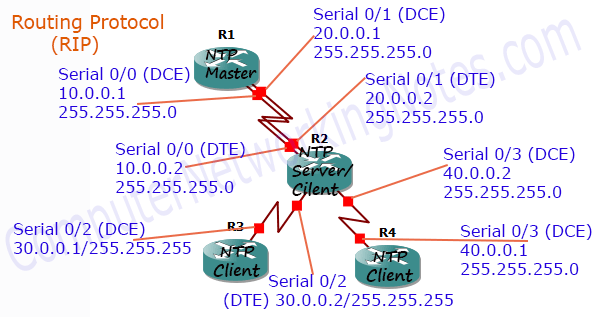 To learn how to assign essential IP configuration in interfaces and configure basic RIP routing in Cisco routers, check this tutorial.

It explains how to configure RIP routing protocol in Cisco router step by step.

Can I use packet tracer for this practice?

Sadly, necessary commands to configure NTP server are not available in Packet Tracer. We have to use the real Cisco router or simulator software which uses real Cisco IOS for simulation such as GNS3 or Cisco virtual lab. This tutorial uses GNS3.

For this tutorial I assume that above essential IP addresses are configured properly in network and RIP routing protocol is running.

If you don’t want to configure this configuration manually, download this pre-configured topology and load it in GNS3.

By default GNS3 does not install Cisco ISO. In this tutorial I used Cisco 2600 router. If this router is not available in your GNS3, download this pre-configured topology. In contains necessary IOS file and configuration. 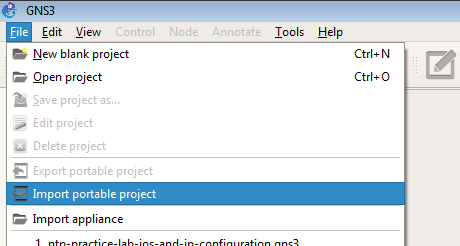 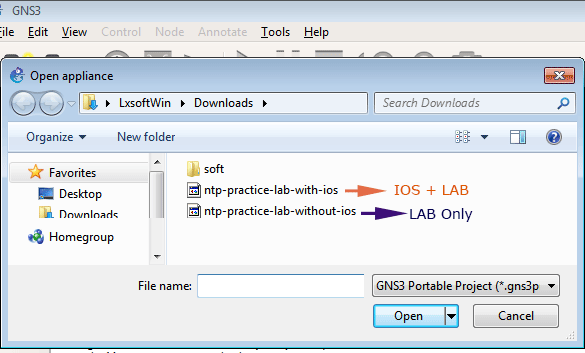 To extract and use this lab, wizard will create a new project. Choose the descriptive name for the project and select the folder location where you want
to save this project and click save button 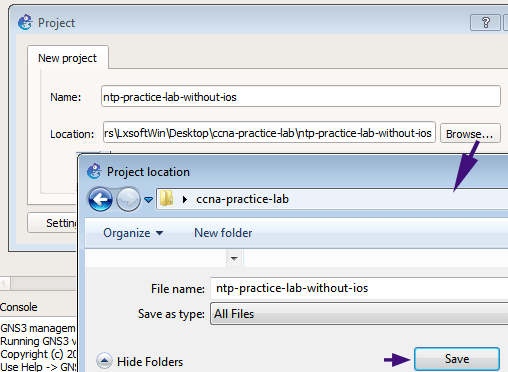 Once practice lab is imported, click start button to start the LAB. 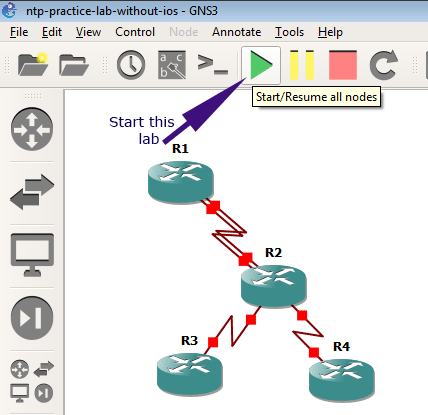 NTP stratum plays key role in NTP configuration. So before we learn how to configure NTP,
let’s quickly understand what stratum is and how it is used in NTP.

Stratum-0 devices use the atomic clock and provide the most accurate time. To use this time, devices need lot of CPU power and memories. Usually these types of devices are used in critical sectors such as Defense, Research, Space and Weather department.

Since syncing clock with stratum-0 devices consumes lot of CPU power and memories, regular computers and networking devices never sync their clocks with these devices. This also applies on Cisco routers. We cannot configure regular Cisco router to use this time.

In real life, usually companies deploy a dedicate NTP (time) server which gets its time from stratum 1 server and later this NTP server is used as centralized source of time in entire network.

In exam we are not allowed to connect with internet. Since internet is not available, we cannot use the public NTP server. Luckily NTP allows us to use any valid source of time. We can use router’s internal clock as NTP source for the practice and as well as in exam (if it is asked).

Regardless which time source you use, configuration steps are same. You can use same commands and steps to configure NTP in real life environment.

To deploy a router as NTP server, following steps are required.

In order to use router’s internal clock as NTP source, we have to match it with current time. 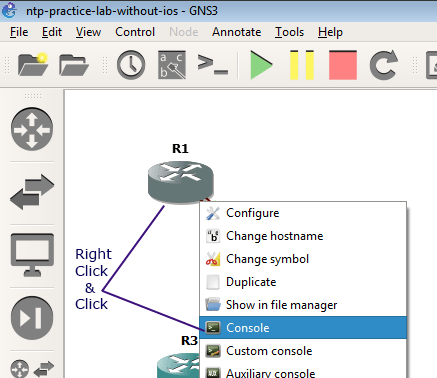 Output of this command provides information about time,
time zone and date. As we can see in above output, all these settings are configured incorrectly
and need to be set correctly. To adjust these settings following commands are used

clock timezone: –
This is the main command.

-5 [Value]: –
This parameter is what router uses to calculate the time from UTC
(Universal Time Coordinated) time. The “-5” value in this field, tells router that our time zone is 5 hour behind from UTC time.

Third command allows us to adjust the “day light saving time”. In this command: –

clock summer-time: –
This is the main command.

recurring [Value]: – Router uses this parameter to take the appropriate action
when “day light saving time” occurred. The recurring value tells the router to spring forward an hour and fall back an hour automatically each year.

DST (Daylight Saving Time) is a concept to utilize the natural daylight in better way.
In this concept, clocks are forwarded one hour from standard time during the spring and are set one
hour back again in autumn. More information about this concept is available here

This command is optional. If your company does not use this concept, just skip this command.

Fourth command is used to exit from global configuration mode.

Fifth command allows us to set the date and time. In this command: –

set clock: –
This is the main command. 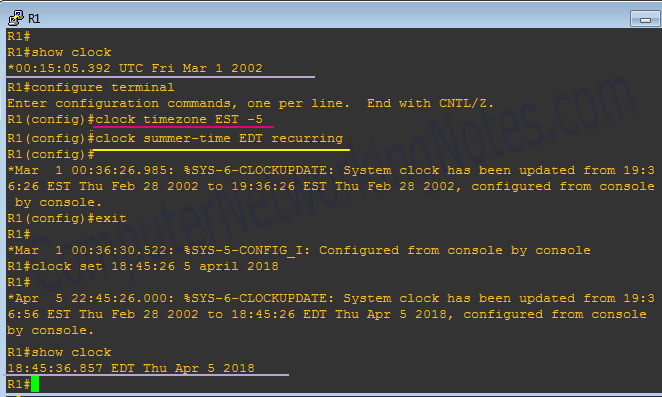 NTP server configuration is straightforward. It takes only two commands to deploy a router as NTP Server.

In first command stratum level is optional. If we do not specify it, router will use default value.
Default stratum level of router’s internal clock is 7.

In second command, we have to specify the NTP source. We can use any valid NTP source here.

Configure interfaces to act as NTP Server only

We have two active interfaces in router R1. Let’s configure them to only broadcast the NTP messages.

That’s all settings we need in NTP Server only router.

By default, routers work in this mode. So no additional configuration is required to deploy a router in this mode. But wait… there is a twist in tail.

By default in this mode, router uses its own clock as NTP source.

So if we want to build a hierarchy where this router receives time from other NTP server, we must have to change the NTP source in this router.

Following command is used to change the NTP source

In our lab, we are using R1 as main NTP server. In order to deploy router R2 as NTP Server/Client router where it reads time from R1, we have to use following command in R2

Configure the NTP server IP address and save the configuration

If you don’t see the updated time just after the above process, just relax and wait. It does not update immediately. Usually updating process takes 2 to 3 minutes. But once clock is synchronized with server, time will be updated automatically.

To configure a router as NTP client only, we need two commands.

As explained earlier, first command insists router to use NTP server time instead of its own local time and second command configures active interface to listen NTP broadcast message only.

Let’s configure R3 and R4 as NTP clients only. Earlier I explained, we can use any configured IP address from NTP server router to get the NTP updates. To understand it more clearly, this time we will use R2’s serial interface’s IP address to connect with NTP server.

This command lists a lot of information. For CCNA we only need to pay attention on first line. First line contains three column; clock status, stratum level and ntp source. Let’s understand these columns in detail.

NTP source: –
This column shows the source or reference of NTP source from where this time is synchronized.

Just like show ntp status command, this command also provides a lot of information.
From this information again we only need to focus on first three columns; address, ref clock and st. Let’s understand these columns in detail

address:-
This is the address of NTP server from where this router received NTP updates.
This column may contains two additional symbols; * and ~. The * show NTP mode in which NTP server is working and ~ shows
how NTP is getting time from NTP source.

ref clock: –
This is the NTP source from where NTP server received the time.

st.:-
This is the stratum level of NTP source.

Following figure shows the output of this command from all routers 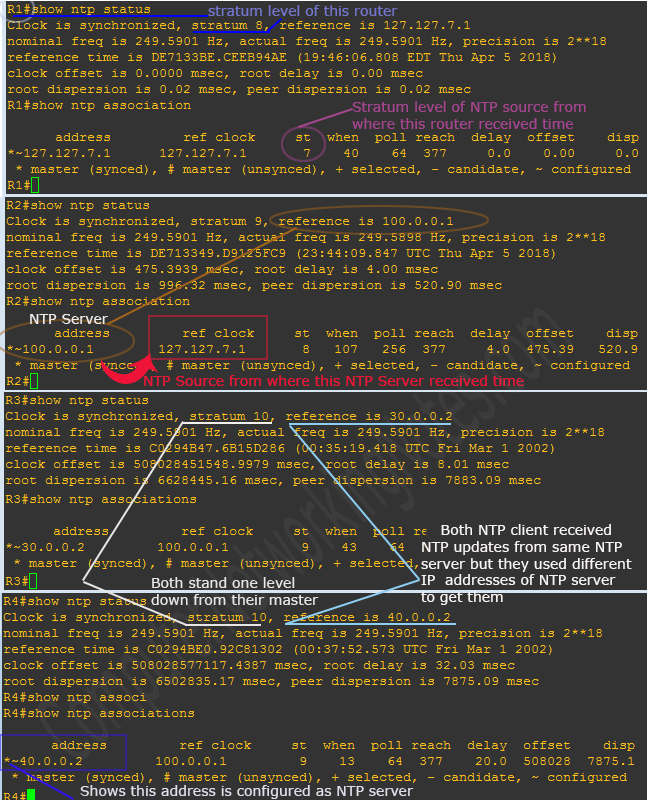 In this lab, we connected R1 and R2 with two serial links. Remove any one link.
Run show ntp status and show ntp association commands again in all routers to view the difference.

Can you figure out why nothing changed in output?

If you don’t know the answer, relax and study this tutorial again. Answer of this question is already explained in tutorial. All you need to do is just pay a little bit extra attention while rereading this tutorial.

If you know the answer, congratulations you have learned NTP concepts and configuration.