This tutorial explains the MAC (Media Access Control) address in detail. Learn what the MAC address is, how it is formed, and the types of MAC addresses (unicast, multicast, and broadcast).

In the LAN network, a unique address is the combination of two addresses; software address and hardware address.

A networking reference model defines the standards, characteristics, definitions, and functionalities of the network. There are two popular networking models; the OSI Seven Layers model and the TCP/IP model.

The software address is also known as the network layer address or layer 3 address. This address is manageable and configurable. Based on network requirements and layout, this address can be configured and assigned to an end device. Almost all modern LAN implementations use the IP protocol in the network layer. The IP protocol uses the term IP address to define the software address.

I have already explained IP addresses in the following tutorial.

In this tutorial, I will explain the hardware addresses in detail.

For convenience and easier readability, when writing a MAC address in hexadecimal format, extra space or
periods or colons are added after every two or four digits. For example, you can write a MAC address in the following ways.

Structure or format of the MAC address

As mentioned above, you can’t assign MAC address to a NIC or onboard NICs. When you purchase a new NIC or a device with onboard NICs, it arrives with a pre-configured MAC address or MAC addresses, respectively.
Before we understand how manufacturers select MAC addresses for NICs, let’s briefly understand why a MAC should be unique in the LAN network.

If a LAN network has two or more NICs configured with the same MAC address then that network will not work. Let’s understand this with an example.

If PC-A sends a frame to the destination MAC address 00000ABB28FC, the switch fails to deliver this frame as it has two recipients of this frame. 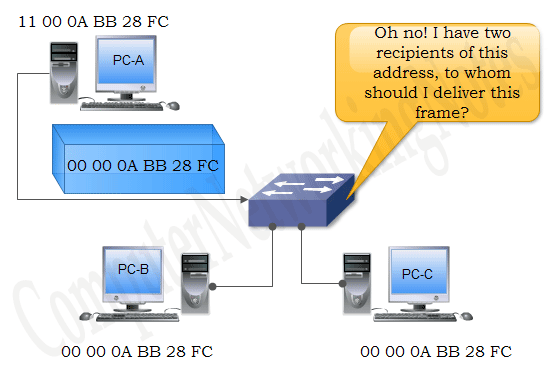 A LAN network does not work unless each device in the LAN network has a unique MAC address.

Now let\’s be back to our main question. How do manufacturers assign a unique MAC address to each NIC?

Before manufacturing NICs, every manufacturer obtains a universally unique 3-byte code, known as the organizationally unique identifier (OUI),
from the IEEE. The IEEE is an international organization that regulates and maintains the namespace of MAC addresses.

After obtaining the OUI bytes, the manufacturer uses these OUI bytes at the beginning of the MAC address of all its NICs or on-board NIC devices.
The manufacturer also assigns a unique hexadecimal value in the remaining bytes.

To keep each product separately from others, the manufacturer uses the remaining 3-bytes. Manufacturers are free to use any sequence or method on the remaining three bytes. For example, the xyz company can assign the MAC addresses to its NICs in the incremental order.

The following table extends this example and adds two more demo companies (ABC and JKL) in the example. It also shows MAC addresses of 5 NICs from each company.

Thus, this procedure ensures that no two NICs use the same MAC address in the universe.

There are three types of MAC address; unicast, multicast, and broadcast. 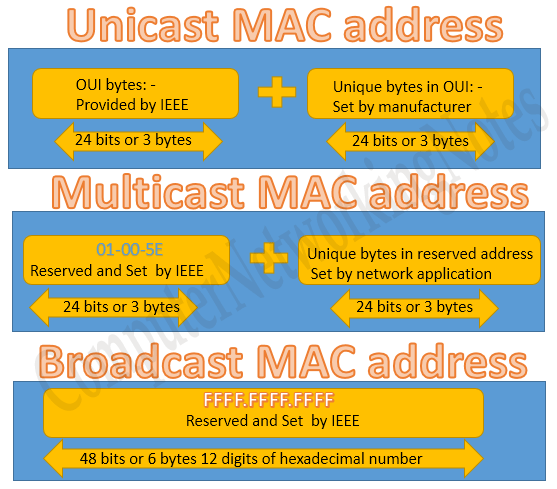