Multiplexing is a process that allows multiple signals to travel simultaneously over a single communication channel or path. Multiplexing in computer networks increases the amount of data that can be transmitted in a given time-span over a given bandwidth.

Multiplexing divides a given path logically into several short paths and then uses each path to transmit the data of an individual node. The following image shows an example of this concept. 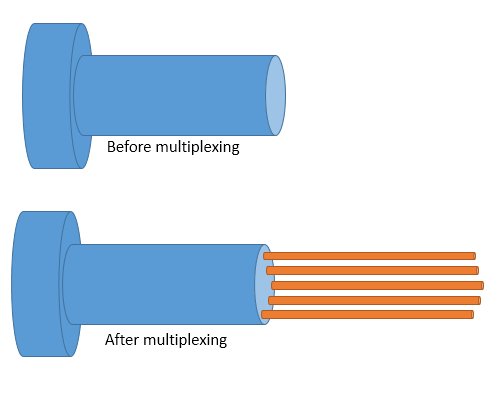 There are several types of multiplexing, depending on the technique used to merge signals. Some common and most widely used techniques are explained below.

Let’s take a simple example. Suppose four nodes (A, B, C, and D) are connected to a network over a single channel. The multiplexer creates four time-slots (1, 2, 3, and 4) and assigns a time-slot to each node; time-slot 1 to node A, time-slot 2 to node B, time-slot 3 to node C, and time-slot 4 to node D. 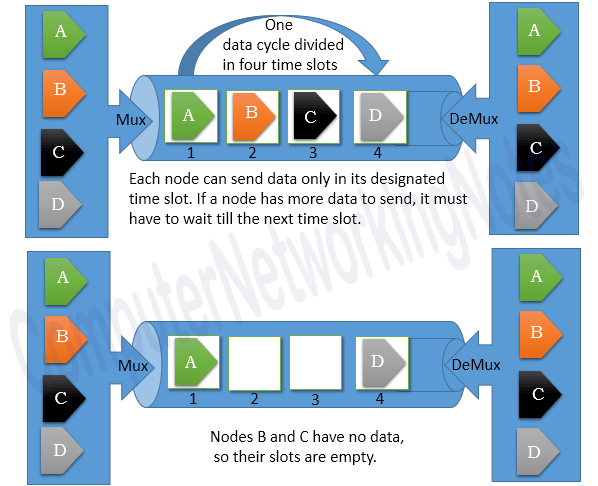 This technique is not more efficient because it reserves a time-slot for each participant node,
regardless of whether a participant node has any data to send or not. A node that rarely sends data can waste too much bandwidth by keeping
its specified time-slot empty in each data cycle.

Statistical multiplexing works similar to TDM. It also divides a data cycle into time-slots and assigns a separate time-slot to each node.
After assigning time-slots, it actively monitors the transmission. If a node does not have any data to send, it assigns the time-slot of
that node to the next node. 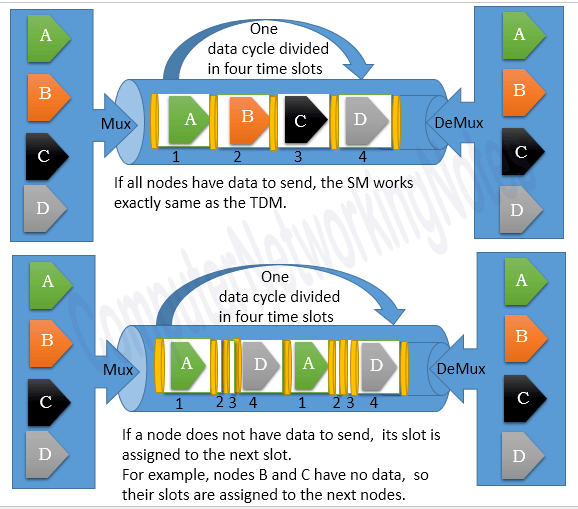 This technique is more efficient than the TDM because it utilizes each time-slot.

This multiplexing technique is used in analog communication. This technique works in two steps. In the first step, it divides the communication channel into sub-channels and assigns a separate sub-channel to each node.

In the second step, it modulates the frequency of the carrier wave of each node. A carrier wave is a simple analog wave that does not contain any data. A node uses a carrier wave to transmit digital signals over an analog channel.

To know more about the carrier wave and how it is used in analog transmission, you can check this tutorial.

The following image shows an example of this technique.

This technology is mainly used by telephone companies to provide internet facilities through existing telephone lines. A human can hear signals of frequency 300–3400 Hz. Telephone companies implement FDM to subdivide telephone lines and send data signals in frequencies greater than 3400 Hz. Since a human cannot hear frequencies above 3400 Hz, data transmission above this frequency does not affect voice communication over the telephone.

The following image shows an example of WDM.

There are two popular types of WDM; DWDM and CWDM.

DWDM uses more wavelengths for signaling than the original form of WDM. Because of this, a signal fiber cable can carry between 80 to 160 channels. This technology uses costly transceivers equipment. Due to cost, usually, this technology is only used on high-bandwidth or long-distance WAN links.

CWDM was developed in an effort to lower the cost of the transceiver equipment. This technology uses cheaper transceivers equipment. In this technology, channels are spaced more widely and signals are not amplified. Because of these, the effective distance of CWDM is less than the original from WDM. Through CWDM, a signal fiber cable can carry between 8 to 16 channels.

That’s all for this tutorial. If you like this tutorial, please don’t forget to share it through your favorite social network.