This tutorial explains OSPF terminology (AS Number, Public AS Numbers, Private AS Numbers, Area, Backbone, Area off Backbone, ABR, IR, Link, State, LSA and LSDB) including basic concepts of OSPF routing protocol, advantage & disadvantage of OSPF and difference between AS and Area in detail with examples.

OSPF stands for Open Shortest Path First. OSPF is a link state open standard based routing protocol. It was created in mid-1980. Since it is based on open standard, we can use it with any vendor’s router.

Features and advantage of OSPF

Just like other routing protocols, OSPF also has its negatives.

This tutorial is the first part of our article “OSPF Routing Protocol Explained with examples\”. You can read other parts of this article here.

This tutorial is the second part of this article. OSPF neighborship is built between two routers only if configuration value of Area ID, Authentication, Hello and Dead interval, Stub Area and MTU are matched. This part explains these parameters and OSPF adjacency in detail with examples.

This tutorial is the fourth part of this article. Configuration part of OSPF includes process ID, Area ID and wildcard mask which make its setup a litter bit harder. This part explains these parameters in detail with examples.

This tutorial is the last part of this article. In this part we will explain OSPF metric component bandwidth, Delay, Load, Reliability and MTU with cost calculation formula in detail with examples.

Basically OPSF was created to fulfill the requirement of enterprise size network. To scale a large size network it uses area concept. Area concept is similar to Subnetting. It allows us to separate the large internetwork into smaller networks known as areas.

Along with Area concept OSPF also supports Autonomous System (AS). Just like area, AS also divide a large network into smaller networks.

Difference between AS and Area concept

Area concept is a feature of OSPF. It is limited only with OSPF. We cannot use it with other routing protocol.

AS is an independent concept originally defined in RFC 1771. We can use it with any routing protocols which understand its concept. 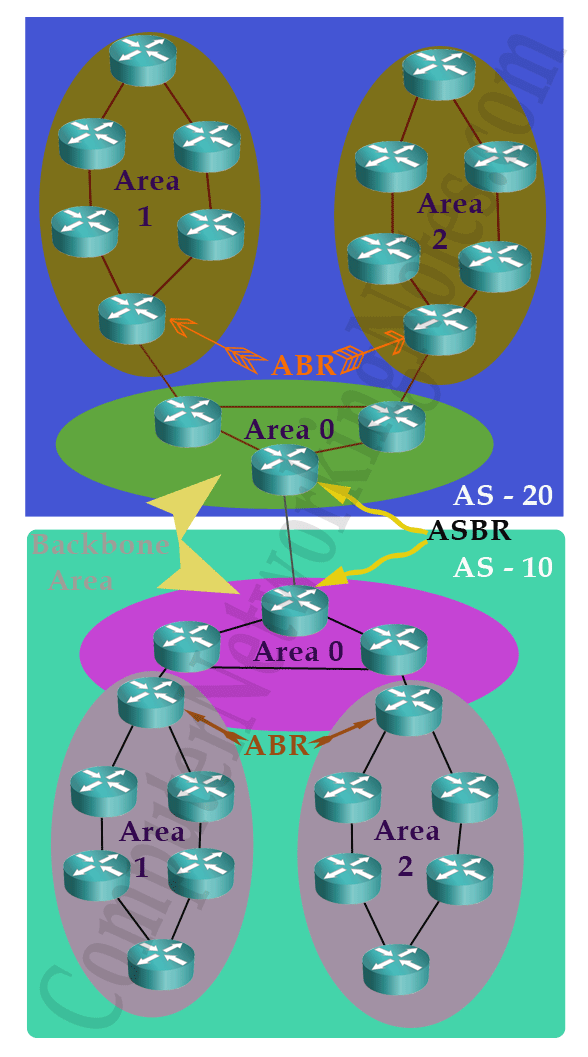 An AS is a group of networks running under a single administrative control. This could be our company or a branch of company. Just like Subnetting AS is also used to break a large network in smaller networks.

AS creates a boundary for routing protocol which allow us to control how far routing information should be propagated. Beside this we can also filter the routing information before sharing it with other AS system. These features enhance security and scalability of overall network.

Basically AS concept was developed for large networks. Routing protocols which were developed for small networks such as RIP do not understand the concept of AS systems.

There are two types of routing protocols IGP and EGP.

IGP (Interior Gateway Protocol) is a routing protocol that runs in a single AS such as RIP, IGRP, EIGRP, OSPF and IS-IS.

To keep distinguish between different autonomous systems, AS numbers are used. An AS number starts from 1 and goes up to 65535. Same as IP addresses, AS numbers are divided in two types; Private and public.

Public AS Numbers: – We only need to use public numbers if we are going to connect our AS with Internet backbone through the BGP routes from Internet. IANA (Numbers Authority) controls the public AS numbers.

Private AS Numbers: – Private AS numbers are used to break our internal network into the smaller networks. We can use any valid AS number in our network unless we connect it with public network. In above example we used two AS numbers 10 and 20 to divide our company network.

In OSPF implementation, routers which connect two different ASes are known as autonomous system boundary router (ASBR). In an OSPF network any router can become ASBR.

Connecting multiple ASes is a complex process. Luckily Cisco understood this and pushed this hard topic in CCNP exam. Till associate level exams we only need to focus on single AS design. 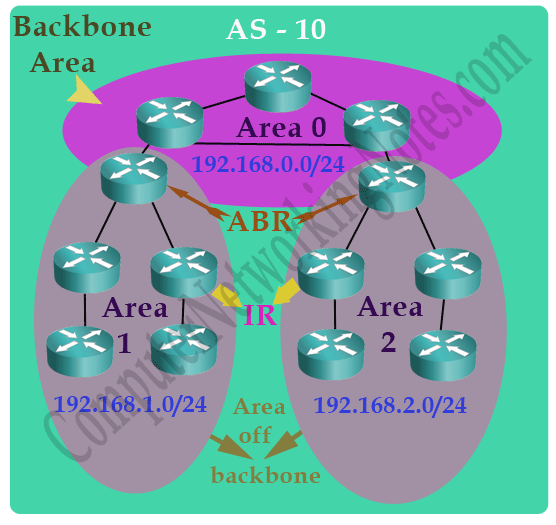 Backbone is the central point of this implementation. Routers running in this area required to maintain a complete database of entire network. All areas need to connect with this area through a physical link or via a virtual link if physical link is not possible.

Area off backbone is the extension of backbone. Routes running in this area required to maintain an area specific database instead of complete database. This is a cool feature. It will speed-up the convergence time.

Area Border Router (ABR) is a bridge between Backbone and Area off backbone. With correct IP addressing we can summarize routes information on this router.

IR (Internal Router) is a router running in area off backbone. IR only needs to maintain an area centric local database.

For easy administration these subnets are divided in smaller networks. With VLSM default subnet /24 is subnetted in /29. When we break a default class C Subnet /24 in Subnet /29, it produces 32 networks (8 hosts in each network).

Create three areas (area 0, area 1 and area 2) one for each default subnet.

In a hierarchy design we always start from area 0. No matter how many areas you create, you should always start counting from 0. Area 0 has special privilege in OSPF implementation. OSPF treats area 0 as backbone area. Assign area 0 to our first subnet 192.168.0.0/24.

So how this implementation reduce network broadcasts?

There are two types of router in an area; ABR and IR.

ABR is a special router which connects two areas. In a proper implementation it should share only summarized route information with remote area.

Through routes summarization on ABR, other areas would see only summarized networks for respective areas instead of full subnets. By doing this we are reducing the amount of information that ABR need to share. 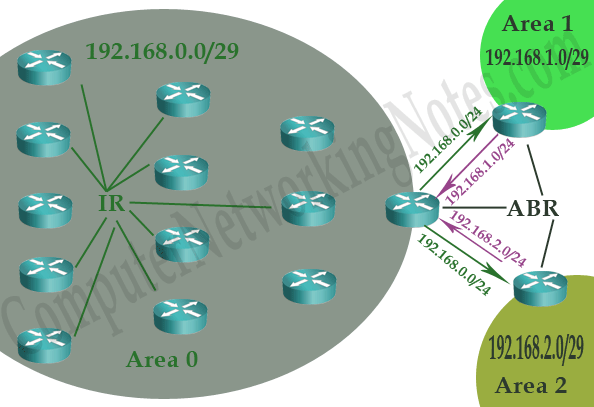 Hierarchy design limits network instability in a single area. It also reduces routing overhead and speed up the convergence time. If properly implemented with VLSM, it can scale an enterprise size network. Vice versa a little mistake can make it a nightmare.

I have a good news for you, Cisco tests hierarchical design in CCNP. So you can fee relax until you prepare for CCNP exam. Till associate level exam Cisco limits designing part to single area. We will use area 0 to explain the remaining article. Of-course we can use any other valid area number, but it is good practice to take correct learning path from beginning. And we know that in a hierarchy design Area 0 stands on the top.

Okay let’s remove other areas from network and make it simple. Now we have only single area to study. Let’s explore it step by step. You learned that OSPF is a link state protocol. What does it mean? What is link? And what is state?

Link is an interface running OSPF routing protocol. When we add an interface in OSPF process, it will be considered as a link.

Every OSPF router maintains a Link state database (LSDB). LSDB is collection of all LSAs received by a router. Every LSA has a unique sequence number. OSPF stores LSA in LADB with this sequence number.

Upon initialization or due to any change in network information, an OSPF speaking router generates a LSA. This LSA includes the collection of all link-states or link state updates. All routers exchange LSA by flooding. Each router that receives a LSA will store a copy of it in its LSDB then propagate the LSA to other routers.

For example figure display a basic flooding process where R1 is generating LSA and flooding it to the other routers of network. 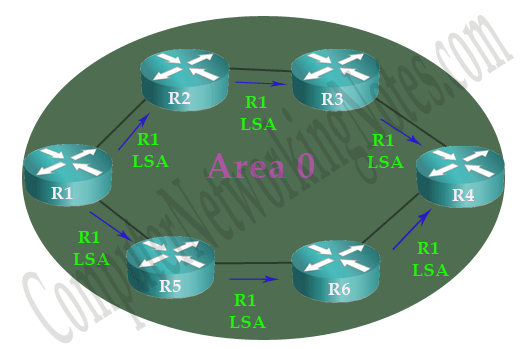 Because flooding process has a mechanism to prevent the loops. Before sending a LSA to neighbors, it asks them “Do you have this LSA?” If neighbor reply with yes, it will avoid flooding that LSA to this neighbor. If neighbor reply with no, it will flood that LSA to this neighbor. Thus R4 will only receive this LSA only from one neighbor; either R3 or R6.

OSPF routers share LSA only with neighbors. To become an OSPF neighbor, certain conditions need to be matched. In next part of this article we will explain those conditions in detail with examples.