In order to become OSPF neighbor following values must be match on both routers.

This tutorial is the second part of our article “OSPF Routing Protocol Explained with examples\”. You can read other parts of this article here.

This tutorial is the first part of this article. In this part we explained basic terminology of OSPF such as Feature , Advantage and Disadvantage, Autonomous System, Area concept, ABR, IR, Link, State ,LSA and LSDB with example.

This tutorial is the fourth part of this article. Configuration part of OSPF includes process ID, Area ID and wildcard mask which make its setup a litter bit harder. This part explains these parameters in detail with examples.

This tutorial is the last part of this article. In this part we will explain OSPF metric component bandwidth, Delay, Load, Reliability and MTU with cost calculation formula in detail with examples.

OSPF uses area concept to scale an enterprise size network. I have explained OSPF Areas in first part of this article. Just for reference, OSPF areas create a logical boundary for routing information. By default routers do not share routing information beyond the area. So in order to become neighbor, two routers must belong to same area. Here one confusing fact needs to clear. Area is associated with specific interface, not with entire router. This allows us to configure the router in multiple areas. For example a router that has two interfaces; Serial interface and FastEthernet interface, can run Serial interface in one area and FastEthernet in another area. It means link which connects two routers need be in same area including its both ends interface. Beside this interfaces should have same network ID and subnet mask.

Following figure illustrate a simple OSPF network.
In this network R1 is eligible to form neighborship with R4 and R2 respectively on S0/0 and F0/0. 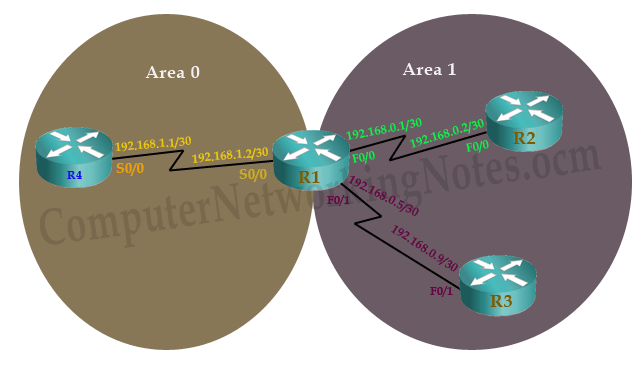 I have question for you. Why neighborship cannot be built between R1 and R3?

Let’s find out the answer step by step.

To enhance the security of network, OSPF allows us to configure the password for specific areas. Routers who have same password will be eligible for neighborship. If you want to use this facility, you need to configure password on all routers which you want to include in network. If you skip any router, that will not be able to form an OSPF neighborship.

Suppose that our network has two routers R1 and R2. Both routers are connected with direct link and meet all criteria mentioned in first requirement. What if I configure password in R1 and leave R2 as it is? Will it form neighborship with R2?

Well in this situation neighborship will not take place. Because when both routers see each other’s hello packet in segment, they try to match all configure values including password field. One packet has a value in password filed while other has nothing in it. In this case routers will simply ignore each other’s packet.

Default dead interval is 40 seconds. If a router does not receive hello packet in
40 seconds from neighbor it will declare that as dead. When this happens,
router will propagate this information to other OSPF neighboring router via LSA message. 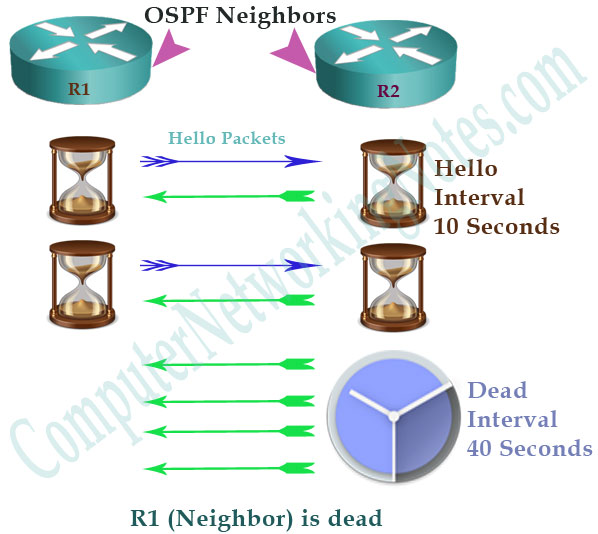 Hello and dead interval must be same between two neighbors. If any of these intervals are different, neighborship will not form.

This value indicates that whether sending router belong to stub area or not. Routers who want to build OPSF neighborship must have same stub area flag.

For example we have two routers R1 and R2:-

Just like another areas, Stub area also has some specific meanings in OSPF hierarchal design.

A stub area has following requirements:-

Configuring a stub area reduces the size of topology table inside that area. Thus routers running in this area require less memory.

Technically MTU (Maximum Transmission Unit) is not a part of compulsory matching conditions. Still we should match this value. If this value does not match routers may stuck in Exstart/Exchange exchange stage.

Consider a situation where MTU setting between two OSPF routers does not match. If the router with the higher MTU sends a packet larger than the MTU set on the neighboring router, the neighboring router will ignores this packet. This function creates serious problem for database updates. Database updates are heavier in nature. Once an update becomes larger than the configured MTU setting, it needs to be spilt. In a case of miss match MTU, database update may lost few bytes. Due to this, OSPF will ignore that update and cannot sync with database. It will be stuck in Exstart/Exchange stage.

It is always worth to spend a little extra time in matching optional values along with compulsory values. Matching configuration values will make troubleshooting easier.

That’s all for this part. In next part we will learn how OSPF routers build neighborship in detail with examples.