This tutorial explains five layers of TCP/IP model (Application, Transport, Internet or Network, Data Link and Physical) and their functionality in detail.

This layer defines the protocols and standards that an application requires to connect with network. For example, an application layer protocol HTTP defines how a web browser can fetch a web page from a web server.

The HTTP protocol manages communications between web browsers and web servers and opens the right resource when a URL is entered in address bar or a link is clicked. Basically it’s a language that both web browser and web server understand and use to provide the required information.

Application layer does not define the application itself. It only defines the standards, services and protocols that an application needs to connect with remote computer. The most common protocols that work in this layer are HTTP, HTTPS, SNMP, NTP, SSH, FTP, TFTP, Telnet, DHCP and DNS.

This tutorial is the fourth part of the article \”Networking reference models explained in detail with examples\”. This article explains following CCNA topic.

Similarities and Differences between OSI and TCP/IP Model

This tutorial is the third part of the article. It compares OSI reference model with TCP/IP model and lists the similarities and differences between both models.

This tutorial is the fifth part of the article. It explains how data is encapsulated and de-encapsulated when it passes through the layers.

This layer is also known as host-to-host layer. It provides logical connection between two hosts. Main functions of this layer are following: –

Let’s understand each of these functions in detail.

The process of breaking up large data file into smaller and identifiable pieces is known as Segmentation and each piece produced in segmentation process is known as a segment.

For example, a host wants to send a 100Mb file over a 1Mbps connection. Since a 100Mb file cannot be transferred over a 1Mbps connection, so it breaks the file in 100 or more pieces. Since a piece is less or equal in size of the connection, it can travel across the connection easily. Destination host, upon receiving all the pieces, reassembles them back in original file. In this example, the process of breaking file is the segmentation and each piece is a segment.

A connection is considered as reliable connection when it provides following services: –

Some applications such as DHCP and DNS do not require reliability. If an application doesn’t require reliability, it usually uses UDP protocol to transmit the data. Since UDP doesn’t use the reliable connection, it doesn’t insert the information in each segment header that is required in reliable connection. Without this information, header becomes much lighter than the header with this information. A segment with a lightweight header moves faster in the network than a heavier segment.

Flow control ensures that the remote host does not become overwhelmed by the source sending too much segments at once. There are two types of flow control; ready /not-ready signals and windowing.

Multiplexing allows a host to initiate multiple connections with one or many hosts simultaneously. When a source opens a connection, a session occurs. A session can be reliable or unreliable. To distinguish each session, source uses port numbers. It assigns a unique source port number to the all segments which it sends in a session.

In original TCP/IP model, this layer is defined as Internet layer. In updated version, it is renamed to the Network layer. Main functions of this layer are addressing and routing. For these functions, it uses IP protocol.

This layer defines standards and protocols for data transmission and physical connectivity. It also provides hardware addressing that is used to locate a device in local network. Switching and connecting devices are the two main functions of this layer.

Broadly, switching is just like routing but it works with hardware address instead of the software address. Switches are used for switching. Besides switching, it also defines standards and protocols which are used for physical connectivity. 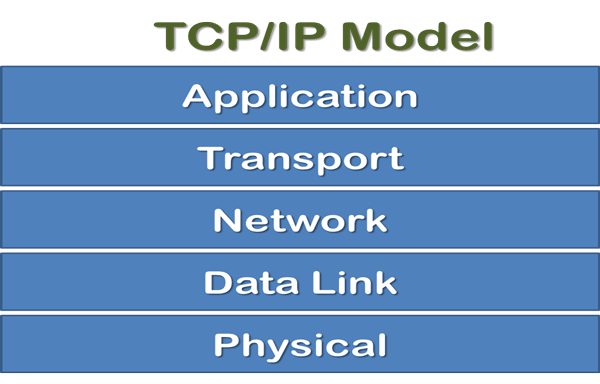 Reference to other networking models

That’s all for this part. In next part of this article, I will explain how data is encapsulated and de-encapsulated when it passes through the layers. If you like this tutorial, please don’t forget to share it through your favorite social site.