This tutorial explains the basic functions and features of the firewall in detail with examples. Learn what the firewall is and how it protects the network resources from unauthorized access.

This tutorial is the part of the CCNA Study Guide. It explains the following CCNA topic.

Describe the impact of infrastructure components in an enterprise network.

What is the firewall?

Firewall is a protective layer. Based on the pre-configured rules, it monitors and controls each packet passing through it.
Broadly there are two types of firewall; hardware firewall and software firewall.

In this type of firewall, firewall is installed in a dedicated device. This device only runs the firewall.
Since all resources of the device are available only for the firewall, it filters the traffic blazingly fast and accurate. It also offers several additional security features such as encryption and logging.

Fast speed and max accuracy are the advantages of the hardware firewall while high cost and complex configuration are the disadvantages of this firewall.

Software firewalls are easier in configuration. An average network user can easily customize these firewalls to meet his security requirements. Since software firewalls do not require any additional hardware to run, they do not increase the network cost.

Low cost and easier configuration are the advantages of the software firewall while slow speed, less accuracy and lack of additional features are the disadvantages of this firewall.

Basic functions and features of the firewall 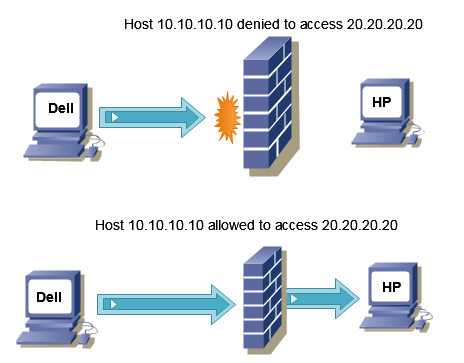 Circuit level filtering goes beyond the packet level filtering. It filters the traffic based on the Transport layer features.
Transport layer uses port numbers to identify the destination application. To provide the guaranteed data delivery,
it also uses a feature known as the Three-way handshake process. In this process, sender computer setup a temporary connection with the
receiver computer before sending any data.

To learn the Three-way handshake process in detail, see this tutorial.

A firewall can be configured to filter the data based on these functions. For example: –

A server and a workstation are connected through the firewall. Several services are running in the Server. From these services you only want to allow a single service or few services to be accessed by the workstation. In this situation, you can configure the firewall in such a way that it allows only those data packets to pass through it which are intended for the allowed services.

For example you can configure the firewall to allow a packet only if, it has the destination port number 80. The port number 80 is associated with the Web service. Once this rule is placed in the firewall, all traffic will be denied from the workstation except the traffic that is intended for the web server. 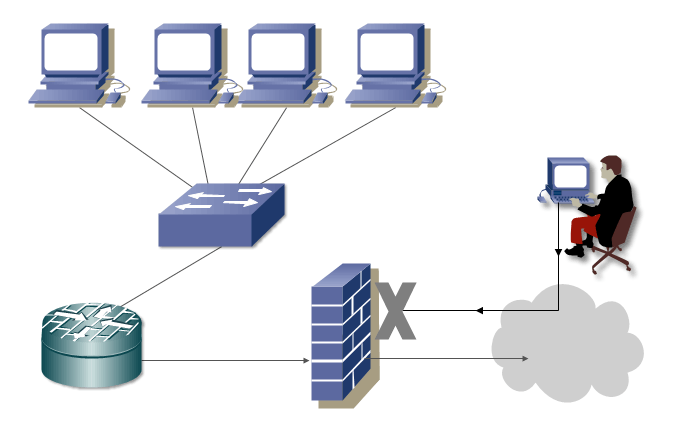 There are several ways, commonly known as the conditions, to instruct the firewall about the possible actions that it should take when it receives a packet. Cisco routers provide a dedicate module for the packet and circuit filtering.

To learn how to configure the packet and circuit filtering in Cisco router, you can use this tutorial.

This is the highest level of filtering. It filters the traffic based on the application layer protocol such as HTTP and FTP. It can also log the traffic for further investigation or actions. Let’s take an example.

A firewall is configured using the packet and circuit level filtering to allow web traffic on port 80. This firewall might allow traffic from an application that establishes a proxy TCP connection across the port 80. To allow only the HTTP traffic and block all proxy traffic on this port, you can configure the firewall to check the application layer protocol or the contents of each packet. After this, only the genuine HTTP traffic will be allowed. All proxy traffic from other applications, such as P2P torrent file sharing program, will be denied.

Application level filtering is more complex and resource intensive than the packet and circuit level filtering. It requires configuration for each application-layer protocol which traffic you want to allow.

For example a router that offers the firewall as the add-on feature should not be used to configure the application level filtering. The main functionality of the router is to forward the data packet as soon as possible. To achieve this goal, a router must spend as little time as possible. A router should not spend the additional time in making the filtering decision.

If advance security features are required, instead of overloading the software firewall from lot of configurations, a dedicated hardware firewall should be used.

Besides the above mentioned filters, a hardware firewall also offers several additional features to filter the traffic.
One such a feature that you should know, is the stateful inspection.

Hardware firewall can be configured to gather and save information about each packet passing through it. This information can be used to filter the further packets. Filtering packets based on previously saved information, is known as the stateful inspection.

This feature is mainly used to deal with the DoS (denial of services) type attack. A DoS attack occurs when a genuine host accesses a genuine service too much times in very short period of time. 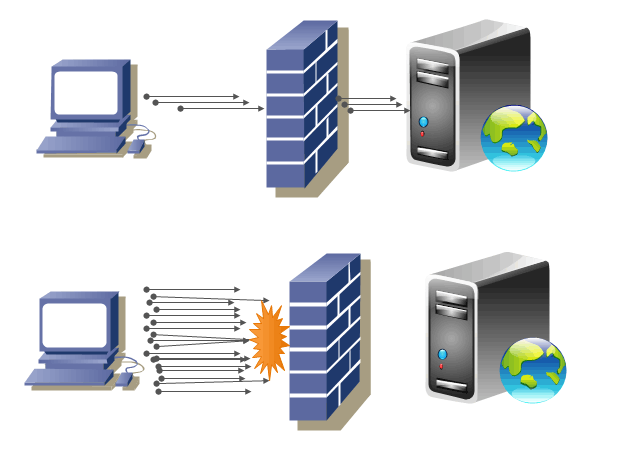 To deal with this kind of attack, the stateful inspection is used. It can track and log the number of TCP connections requests per second from each client IP address to each server address. Based on saved information, it can track the repeated requests. When it notices that the number of requests is very large from the small number of clients, it blocks those clients to help the server from the DoS attack.